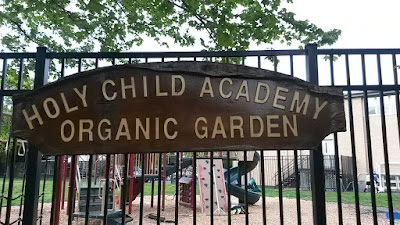 Thank you to the Holy Child Academy parents and students who are maintaining the school's organic garden during the summer months. The weeding and watering will keep the garden healthy for the start of the school year.


Since 2012, fourth graders and their teacher, Gary St Cyr, have partnered with a Holy Child Academy parent to select and germinate vegetables from seed in the HCA classroom growing station.

In the process, students learned the parts and functions of flowering plants, plant cell biology, plant reproduction, plant-life processes, seed dispersal, and the significance of organic gardening. They discovered how to compare and contrast their very own plants with invasive weeds that can sap vegetables from the nutrients needed to achieve maximum yields. Students also learned the essential components of nutrient rich soil and photosynthesis: sunlight, water, CO2.

Have you ever wondered what goes into producing a Claymation short? At Holy Child Academy's weeklong Claymation camp, students will learn to storyboard a short segment, create Claymation characters, take stop-action photographs and create a piece that includes background, sound and text.

For camp details and to register: www.holychildacademy.com/summercamp.

Watch the Claymation short created during the school year by seventh-grade students Chloe and Victoria: https://youtu.be/09ymjtWDzXk

Posted by Unknown at 7:13 AM No comments:

STEAM: Shaping the Future of Education

The HCA Innovation Lab was the focus of a recent MainLine Neighbors e-newsletter!

"I am so glad to be part of a community that allows me to do what I love!"

"While I have been teaching for 17 years in early childhood, seven of which were in a Montessori classroom, this is my first year at Holy Child Academy.

"I graduated from Cabrini University with a degree in early childhood and elementary education and earned a master’s degree in curriculum and instruction from Grand Canyon University. In summer 2017, I attended a Montessori workshop at Chestnut Hill College.

"It is one of my strongest beliefs that each student deserves an atmosphere that is safe, nurturing and provides stimulants in which to flourish emotionally, academically, physically and socially. It is important that each student feel that he/she is a valued member of the group. I strive to provide each student with the encouragement he/she needs to succeed in their academic journey. For students to construct knowledge, they need the opportunity to discover on their own and practice skills in authentic situations. Giving students access to hands-on activities and allowing sufficient time and space to use materials that support the lesson being studied creates an opportunity for individual discovery and construction of knowledge to occur.

"It is my role as an educator to provide situations, which allow risk taking as the information is presented and explored. Teaching provides a continual learning, growing and self-discovery within me. I am passionate about teaching, learning and influencing the lives of others. My hope, as an educator, is to constantly offer an environment that is challenging, safe and inspires students to work hard to achieve their goals.

"Nursery 2 is a new and exciting time for families and their children. It is a time of change and new beginnings filled with new friends, new surroundings, new skills and new challenges! Together, with the parents, we shape a child’s academic future at HCA."

Read Mrs. Devenney's Nursery 2 blog
Posted by Unknown at 8:45 AM No comments: 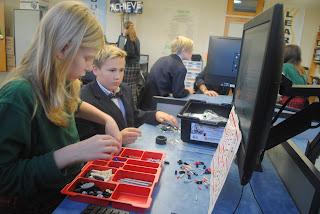 What would you do if you knew you could not fail?

That's the question Holy Child Academy students answered using digital comic strips for their first project in the school’s brand new Innovation Lab dedicated to STEAM (Science, Technology, Engineering, Arts, and Mathematics). The exercise not only introduced the lab’s nuts and bolts, it also set the tone for the kind of learning that will take place there. Learning that knows no fear.

Filled with energy and excitement that’s audible from the halls, not to mention some pretty cool technologies and manipulatives—like iPad-powered robots, K’Nex, a 3D printer, and a stop-motion studio—useful for all kinds of projects and investigations, Holy Child Academy’s Innovation Lab is one of a kind in Delaware County.

While many high schools, and even some middle schools, have been incorporating STEAM into their approaches for about a decade now, it’s still rare to find labs like Holy Child Academy’s, where four-year-olds engage in STEAM activities on a weekly basis.

In the lab, students work in groups of two to three at their own pace on units such as robotics, mechanics and structures, alternative and renewable energy, digital communications, and software engineering. If students want to dive deeper into a topic or a technology, they can.

The strategy behind the STEAM

Despite the STEAM sector’s rapid growth, too few Americans are pursuing careers in STEAM, especially women and people of color, who are traditionally underrepresented in these  fields. With a richly diverse co-ed student body, Holy Child Academy lends itself in a unique position to help fuel and diversify the nation’s future STEAM workforce.

“Research has shown that once students get to high school and college, they’re not choosing STEAM fields because they found the subjects too challenging or too dry in their early years,” explained Margaret Fox-Tully, Holy Child Academy Head of School.

“In addition, there’s a perception that you’re either a math and science kid or a humanities kid, but not both. “We believe we can really debunk those myths if we introduce children to STEAM at the very youngest ages in a creative, self-directed, experiential way. is lab does precisely that.”

In addition, the Innovation Lab’s emphasis on self-directed exploration and creative problem-solving—guided by a facilitator rather than taught by an instructor—is a natural extension of Holy Child Academy’s Montessori-based early childhood program.

Director of Development and Alumni Relations Rebecca Rimmer Antczak, a parent of three Holy Child Academy students, drove the endeavor from the time the idea of a STEAM lab was first proposed.

“Becky saw the potential of this project, and was probably its biggest champion,” said Fox-Tully, who explained that the initiative was able to move forward quickly with total and enthusiastic support of the school’s board of trustees.

During the program search and fundraising process, Holy Child Academy considered a number of options for developing the Innovation Lab, including building a homegrown lab from the ground up. Ultimately, the school decided that the best use of its resources was to partner with a company with expertise in the field. “We wanted to find a first-in-class resource to support this effort,” Fox-Tully noted.

Creative Learning Systems’ solution offered a number of advantages that led to its selection for Holy Child Academy’s Innovation Lab, including the potential to be up and running for the beginning of the 2017-18 school year. The lab’s web-based learning modules are regularly refreshed with new and up-to-date offerings, keeping the school on the cutting edge without investing staff time. The curriculum, though student-driven, is structured so that students experience multiple technologies and units over the course of the year. And of all of the options that the school considered, Creative Learning Systems’ approach has the most to offer young children—a critical audience at Holy Child Academy.

Instead of earning grades, students journal their progress, conduct a self-assessment at the end of each project, and present to the class. Their efforts are kept in an e-portfolio, which becomes a body of work the students can take with them when applying to high school.

“The is lab is a wonderful fit for how kids learn and develop. They’re engaged. They’re challenging themselves,” said Erica Zwilling, the Innovation Lab facilitator and one of the team members who helped the school evaluate options for launching a STEAM lab.

Even the two- and three-year-olds reap the benefits, enjoying STEAM activities with Zwilling in their own classrooms.

Zwilling brings a unique mix of practical experience and theoretical knowledge to her role, including a background in research and in science education, as well as a master’s degree in human development and family studies. Before joining Holy Child Academy’s faculty, Zwilling coordinated the Girls in Science and Technology Program at the American Helicopter Museum and Education Center. She also happens to be the parent of two Holy Child Academy alumnae and four current students.

Zwilling sees the STEAM-career exposure as one of the program’s distinct advantages for children at Holy Child Academy.

“As a parent, I want my children to find careers they love. Hopefully this program sparks those interests.”

Official unveiling of a worthwhile investment

“Innovation Lab,” the official name of Holy Child Academy’s STEAM lab, was chosen by a student vote. Local officials were on hand to cut the ribbon at the lab’s dedication ceremony on Oct. 20. The lab’s supporters and well-wishers also were in attendance.

Mary Emily Pagano, board trustee from 2010 to 2017 and board chair from 2011 to 2016; Robert and Margaret Warwick; Ethel Sergeant Clark Smith Memorial Fund; and the Connelly Foundation were lead funders for the project.

“The Innovation Lab will empower Holy Child Academy students to navigate this very complicated world that we live in,” Pagano remarked. “I believe we have an obligation to entrust something bigger and better to the next generation. I am happy to be part of this endeavor.”

A number of businesses and foundations otherwise unfamiliar with Holy Child Academy also supported the project financially—a testimony to its innovative value. The lab caught the media’s attention, as well, garnering coverage on CBS3, 6ABC, and NBC10 and in The Philadelphia Inquirer and The Delaware County Daily Times.

But the lab’s most resounding endorsement may have come from the students themselves.

“I like STEAM because it teaches how to be independent in a fun and scholarly way. I also feel that the STEAM lab is a great environment for learning new techniques and fundamental information that is used in many jobs in today's world," reported seventh grader Jay Adams.

“My favorite part of STEAM is to integrate technology and engineering,” he continued. “For example, in a current project with a classmate, we built a small car out of a box of pieces and a picture. The lesson learned was how to use gears to make a car faster or slower, and stronger or weaker.

“Overall, I really appreciate the new STEAM lab, and hope it becomes part of the standard curriculum for kids all around the world.”

After the lab was installed last June, summer campers took it for a three-week test-drive. Although only six months have passed since the lab’s official launch at the start of the 2017-18 school year, anecdotal evidence suggests it’s already serving its purpose.

Now, when asked about their favorite part of the day, little girls answer “STEAM.” On the ride to school, siblings compare who gets to go to the Innovation Lab that day. In the midst of a STEAM activity, students who feared they might have broken a lab component remained undaunted, requesting some duct tape to solve the problem instead of crumbling under a perceived failure.

Which brings us back to those digital comic strips. So what would Holy Child Academy’s students do if they couldn’t fail? They would apply to Harvard, perform on Broadway, search for a cure for pediatric cancer, create a computerized bike, parachute from an airplane, play professional tennis, or climb Mt. Everest. In other words, they would dream big for their futures. Creating the digital comic strips was just the first step on the path to building the confidence and resilience that incubates aspirations like these.

Most importantly, with the critical 21st-century skills growing in Holy Child Academy’s Innovation Lab, its STEAM-powered students are ready for whatever challenges the future holds—even in a world of technology and careers yet to be imagined.